Now that you’ve gotten some experience with VoiceOver, and made some improvements to make your app more accessible with VoiceOver, let’s now take a look at what’s still missing, and the extra steps you can take.

While I think these are two great examples, it may be hard to wrap your head around what should (and shouldn’t) go into the accessibilityValue. Note, though, that it is more than OK (and very likely) for it to be empty. Plus, it describes a value of the element. So it wouldn’t make too much sense to put in some data of a complicated cell, for example.

Going back to the example of a tweet, it wouldn’t make sense to put in, for example, the amount of likes; this is not a value of the element.

Accessibility hints are, as they say on the tin, hints. There’s two important things to note about them: one is that they should never contain crucial information, as a user can turn them off in their settings.

Secondly, there are some guidelines on their contents, as per the documentation:

The hint is a brief, localized description of the result of performing an action on the element without identifying the element or the action. For example, the hint for a table row that contains an email message might be “Selects the message,” but not “Tap this row to select the message.”

Particularly, while this documentation doesn’t go into great detail, the “tap” terminology is something to avoid — for accessibility hints and, really, any other strings alike. Users may not be interacting with your application by tapping; imagine a Catalyst app running on the Mac, for example, or an iOS app running on the Mac… or on an iPad with a hardware keyboard with trackpad. Even for Voice Control this becomes awkward… but we’ll talk about that more in a following post.

VoiceOver has the concept of performing an “escape”, and is a way to dismiss the currently shown view — where sensible. Think a modal view, or popping a view in a navigation stack.

The system does a great job of giving you this for free when, for example, using UINavigationController. But it’d be good to audit your application and check if it is possible to perform these escapes where you expect them to — especially around custom (modally displayed) views.

You may be wondering how a user can perform this escape, though? And thus, how you can test it? Well…

With two fingers, draw a “Z” on the screen: the Zorro gesture, as I like to call it.

In those views that require adding support for escapes, override accessibilityPerformEscape(), implement your dismissal, and return if it succeeded, like so:

Let’s go back to imagining a tweet. It has replies, retweets, and likes; those are (already) three actions within one element; one cell. When directly interacting with it (outside of VoiceOver), we can activate those buttons as we would with any other button.

But in VoiceOver, while we could expose all of these buttons as separate elements, that would add a lot of elements to swipe through, and with that, possibly quite a lot of clutter. It’s unlikely you’ll want to reply to, retweet, and like every tweet you navigate to. So what can we do? Meet custom actions.

Custom actions let you add, well, custom actions to accessibility elements. Actually, there’s a few places where the system does this automatically already, such as with UISwipeActionsConfigurations.

To use actions, you’ll first need to get acquainted with the rotor, which is being used in the following video. 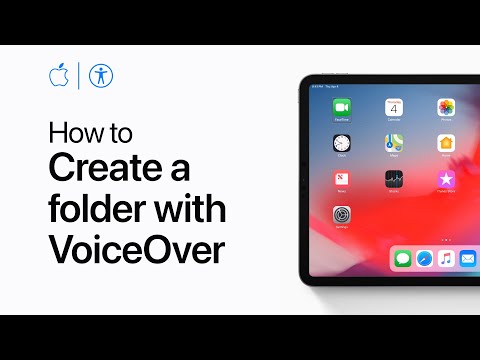 Now, knowing how to use the rotor “knob”, navigate to an app with those swipe actions, like Mail.app, Notes.app, or perhaps your own app. If turned on in VoiceOver settings, note VoiceOver will say “Actions available” for a mail in Mail.app, a note in Notes.app, and when in the Actions rotor, swiping up or down with one finger will guide you through the list of custom actions. From there, you can double tap to activate it.

To add your own custom actions, like in our example with replying, retweeting, and liking, use UIAccessibilityCustomAction.

Note that we pass in an image. You may wonder why. Which, if you did wonder, is a great observation. This would be something that is interesting to other assistive technologies, like Switch Control. For more information on Switch Control, I’d highly encourage you to watch this WWDC session, which, in fact, introduces this exact addition to the custom action API!

Finally, let’s talk custom content. Remember the advice to keep your labels short, even if that would mean you’d leave out some information?

To prevent long accessibility labels, and to make information accessible in a more piecemeal fashion, Custom Content was introduced with iOS 14. Let’s take a look at its documentation:

An AXCustomContent object contains the accessibility strings for the labels you apply to your accessibility content [..] to allow your users to experience the content in a more appropriate manner for each assistive technology.

While significantly improving the VoiceOver experience for users, this API is, in my opinion, rather awkward to work with, requiring the addition of quite some (unnecessary?) complicated code. While we’ve seen APIs like accessibilityCustomActions, being available on an(y) NSObject, this is not exactly the case for AXCustomContent.

Not only does AXCustomContent live in its own framework, Accessibility, it comes with a protocol that needs to be implemented, and some awkward baggage from it being written in Objective-C, and arguably not bridged to Swift in the best way possible.

I unfortunately don’t know the reasons behind this — all I know is that it hurts the developer, and I really, really wish it wouldn’t have had to.

Because why can’t we have

… which neatly mirrors the accessibilityCustomActions API, but instead have to go through the following hoops:

… from importing another framework, to requiring classes (although one could still store the information in, say, a ViewModel that is a struct, and pass it along to the view that is a class), having to deal with an awkward null_resettable, as well as backing storage. Woof.

And then there’s one more note: the AXCustomContent API has a notion of importance. By default, content has an importance of .default, and it can be set to .important. I would recommend against using this. What it does is it will add the value (or values in case you mark multiple custom content items as important) to the end of your initial VoiceOver output — i.e. after the label and value.

This can (more often than not) lead to information missing — as with the tweets, for example, say likes are important, “95” itself doesn’t give enough information as to what this is about. So, if there’s important information, consider making it part of your accessibilityLabel instead.

Alas. The good news: like we’ve seen before with custom actions, users can now use the rotor to navigate to custom content, then swiping up or down with one finger to go through this information.

If you want to try out how this works, consider checking out Photos.app — it uses custom content to give a bunch more information about pictures. And as with actions — depending on your settings — the system will indicate more content is available.

While after reading all of this (and perhaps applying some of it in your app), this all might feel like a lot of work. But take a step back, and appreciate how a lot of the what to do to make your app accessible is, arguably, part of the design.

Try to take this VoiceOver-mindset to this new feature, or new design, and think: what are the actions here? Are we using any images to represent actions? If so, what do these represent, in words? How can we split up information, making use of custom content?

And with that, you’re halfway there already… now the (other) fun part of implementing it is a lot clearer, and part of the design rather than an afterthought. Heck — I would be surprised if this doesn’t affect your initial design at all, perhaps making small tweaks that benefit everyone.

Let me know your thoughts on this post, and if you have any questions, I’d love to help!