I’ve received quite a few questions along the lines of “I’m a developer/quality assurance engineer / … and am interested in accessibility; where do I start?”

I wanted to write some thoughts on this topic. For one, because I think it’s others than the people that have reached out to me would be interested in, and to have a reference for those reaching out.

More specifically, what I want to look at is not “what APIs are there to help make an app accessible?”, but rather “how do I use the available APIs to make my app accessible as best as possible?”. For the former, I highly, highly recommend Rob Whitaker’s blog, Mobile A11y, as well as the Developing Inclusive Mobile Apps book he wrote, which covers both iOS & Android, which can give another layer of both appreciation and insights into accessibility.

In this post, I want to look at — what I would say — one of the three major assistive technologies you may want to pay attention to on Apple platforms. There’s Dynamic Type, VoiceOver and Voice Control.

So you’re interested in improving the VoiceOver experience for your users. VoiceOver is Apple’s screen reader, which also comes with support for Braille.

Where do we start? Probably the best way to start is to get a feel of the technology by using it yourself. As neatly put into words by Tommy Edison:

Try and use accessibility on your phone or computer for a day. When you get to experience some of the frustrations of a site that’s not done properly or an app that doesn’t work for you.

Also — I highly, highly recommend taking a look at Tommy’s YouTube channel to get a better understanding of how users rely on VoiceOver (and much more).

The easiest way to turn VoiceOver on (and off again), would probably be through Siri: “Hey Siri, turn on VoiceOver” will get you off to the races. What’s trickier is knowing how to navigate in VoiceOver. Apple Support made a great introduction video, that, honestly, is a must watch: 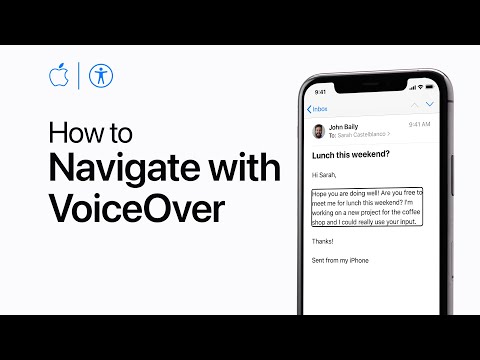 Now that you’ve seen some basic usage of VoiceOver — moving forward (with swipe-right), backward (with swipe-left), and activating items (by double-tapping), try it out in your own app.

Making Your App Accessible with VoiceOver

A great place to start making your app more accessible is here, with VoiceOver. It is not unlikely you’ll be navigating past items that will be announced as nothing else than “button” to VoiceOver. Or, perhaps, you’ll navigate to elements that are decorative, and do not add (but rather distract) from the VoiceOver experience. You’ll improve this using accessibilityLabel, which we’ll get to in just a second.

Then, perhaps, your actionable cells aren’t announced as buttons to VoiceOver, your images aren’t announced as such, or a header isn’t, well, a header. This is another crucial VoiceOver need — both as information for the user, but also the system… so it can do some really neat work under the hood.

For this information, rather than adding this to your label, you’ll be wanting to use accessibilityTraits — ranging from the aforementioned .button, .image, .header, to .selected, .notEnabled, and .adjustable.

Take another pass through your app, or another (system) app, and note these traits being part of the respective elements.

So now the task is for you to go through these elements that aren’t accessible as expected — adding accessibilityLabels, as well as accessibilityTraits.

Note that the latter is an OptionSet — an element can have multiple traits. APIs like UIKit and SwiftUI often give great defaults, so you’ll (most often) want to insert new traits, rather than override the traits completely.

For your labels, try to keep these short. At a later stage, we’ll be adding more information to elements, but not necessarily in the form of a label.

VoiceOver users navigate the app mainly based on these labels, and if they are very long, or contain a lot of information, that makes an app a lot harder to parse and use. For a tweet, for example, the label might include the author and the tweet itself, but exclude the amount of retweets and likes.

There’s a lot more to learn about VoiceOver, and a bunch more you can do to further enhance the experience; we’re only partially there.

Yet, you’ve learned a thing or two about using VoiceOver, navigated your app using the technology, and perhaps made some improvements using labels and traits. For now, try to use your app with these improvements in place and ask yourself: what information is missing for these users? How would I express this information to them?

Then, we’ll take a look at custom actions, custom content, performing escapes, hints, and values, next.

Let me know your thoughts on this introduction, and if you have any questions, I’d love to help!