I’ve been meaning to blog about Swift and Objective-C interoperability for quite some time. It’s a topic that may no longer be that “hot” anymore — when I told a friend I wanted to write on the topic, I was told “but no one is writing Objective-C code, and thus, interop code anymore!” While it may be a minority, I know there are a few companies that still write Objective-C, as well as projects that still have so called “legacy” Objective-C code that they may not want to rewrite… but do want to use from Swift.

While I’m not sure if this series of blog posts will end up being a “source” to reference when it comes to Objective-C interop… but I hope it can teach you some things regardless.

Before going through certain aspects of annotating your Objective-C headers (which is basically what allows you to interop between your Objective-C and Swift code), I want to start where, well, we should start: generated interfaces. Xcode allows us to, for a given Objective-C header, generate its accompanying Swift interface. Which at worst may be empty, and at best (already) exposes your complete interface to Swift.

Near the top left of the main Xcode interface is a button called “Related Items”. It’s the button of connected squares right beneath your project name in the top bar.

Clicking on it reveals a bunch of options — I’d encourage you to check them all out! But for now, let’s go to Related Items > Counterparts > MyHeader.h > (Swift 5 Interface). As you can see, there are, at the time of writing, options to look at the Swift 4, 4.2, and 5 interfaces. 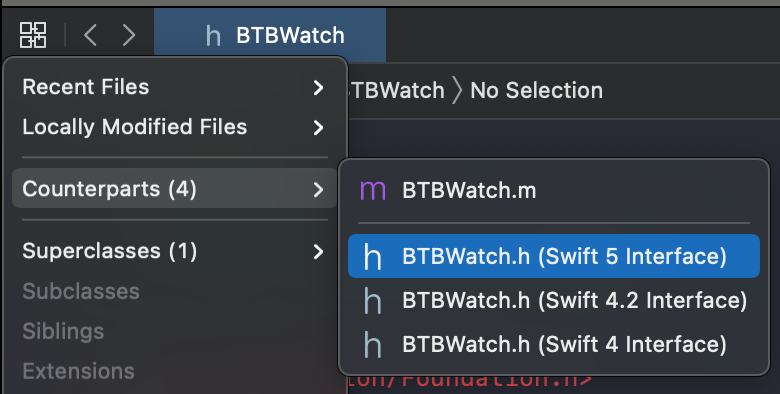 While you’re probably here because you’re interested in reading about making your Objective-C code accessible from Swift, you may just wonder: why? Why Swift? Or perhaps, for whatever reason, you can’t write production code in Swift and “simply” want to prepare your Objective-C code for a future where you can.

For the first question: in Swift, the compiler can do so much more to help you write valid, safe code. Switches can be exhaustive, causing compiler errors when you add new cases to an enum. On the topic of switches… they are so much more powerful allowing your to write more expressive, safe code. No longer can you only switch on integers. You can switch and pattern match using pretty much anything, like strings.

Nullability is the concept of defining if a type can be nil or not, guaranteed by the compiler in Swift. There’s a few keywords in play:

And then there are two more, and they are good friends:

Let’s take a look at these in action with the following Objective-C header file.

If we look at its generated interface, this is what we’re starting off with:

Notice Int is not implicitly unwrapped — as these are backed by value types in Objective-C (where they can not be nil), neither will they be in Swift.

Let’s start with the “buddies” NS_ASSUME_NONNULL_BEGIN and NS_ASSUME_NONNULL_END; we’re seeing exclamation points in our generated interface… as we discussed previously, we generally want to avoid these. And as you can imagine, currentDate, for example, should always return a non-nil date.

(Oh, and while we’re here… going to Related Items > Counterparts > MyHeader.h > (Swift 5 Interface) again may not reflect any updates made to the header. Not sure why that is the case. You can most often switch back-and-forth to Swift 4.2 and 5, and it will regenerate.)

While you’d probably, at the very least most often, have a watch with a strap (or bracelet) on, it may not always be the case. So let’s make it optional.

Now, the compiler allows us to set it to nil for those cases we don’t have the watch attached to a strap or bracelet.

And, we only have to annotate the one property, instead of annotating all the remaining ones with nonnull courtesy of NS_ASSUME_NONNULL.

Whereas in Objective-C, at the call site, there’s not that much of a difference between methods and properties — you can call both a property isRunning and a method isRunning as [myWatch isRunning], but in Swift this would be different: myWatch.isRunning versus myWatch.isRunning(). Generally, you want to make base this on performance; properties when something can be executed in O(1) time; otherwise, use a function.

Going back to our Watch example, that means we’d probably want to convert our current* functions to properties.

which would generate, as we’ve seen earlier:

which generates the following:

In Swift, we generally use a different naming strategy than in Objective-C. A big reason for this is the difference in the way we write functions. Where in Objective-C, the first argument is always part of the function name, in Swift, it will be like any other argument — and thus, looking at our example again:

Is something we’d probably want to rename in Swift. While sometimes the generated interface is already smart enough to infer these “Swiftier” names, in this case, it didn’t. We can explicitly name it using NS_SWIFT_NAME, like so:

Notice we omit the error parameter, as this is natively bridged to use throws in Swift.

As in Swift we have namespaces, we would probably also want to consider dropping our class suffix:

Let’s add something to our class: an enum that describes the kind of movement in our watch:

and let’s take a look at what this exposes in Swift:

In Swift, we can nest types. Which would probably make sense to use here; we would nest it under our Watch; its associated or “parent” object:

which generates the following:

One thing to note here is that we use NS_ENUM; NS_CLOSED_ENUM also exists. You would use this if you’re absolutely sure this enum will not change going forward; imagine, for example, a traffic light only ever having a red, yellow, and green light.

If you want to read more about why you’d want to make sure to get this right, and what it means in Swift, I suggest this great blog post by John Sundell.

Our watch is made by someone, some brand. Let’s explore how we could write this in Objective-C, and how we can best expose that to Swift:

But in Swift, this can be expressed in a more elegant, typed way:

Which generates the following in Swift:

We could then even extend this in Swift:

And, as you may have noticed, we can use this new “type” Watch.Brand. Whilst NSString under the hood, only Watch.Brand “types” can be passed.

Imagine we’d want to describe what kind of complications our watch has. For this, we can use an option set.

Note, particularly, that this conforms to the protocol OptionSet, transiently conforming to SetAlgebra, which gives us these functions for free, making for a much more expressive type than is possible in Objective-C.

In terms of our watch’s functions, let’s say we’re storing them as NSString instances. We’d not want a “random” NSInteger sneaking in there, now would we?

Let’s annotate it, going from

we change it to

Well, this is a great start in making your Objective-C code interoperable with Swift. If you want to read (or watch) more on the topic, you can read the other blog posts in this series as they are released. I also very much recommend the WWDC session Refine Objective-C frameworks for Swift.